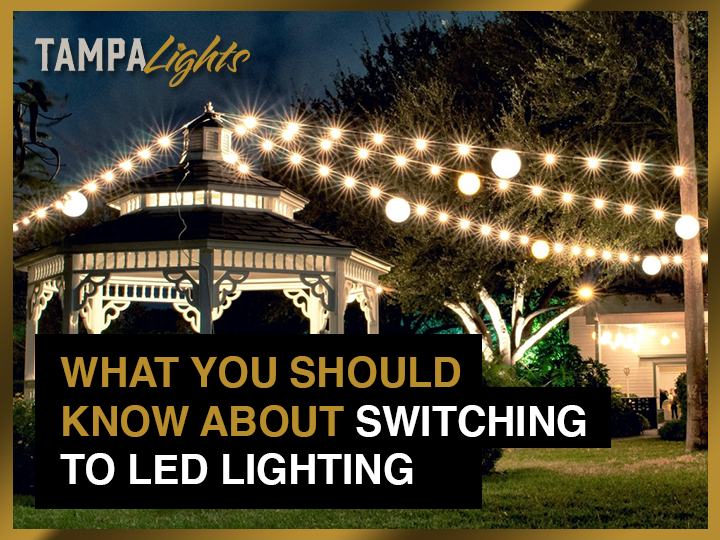 LEDs are the pinnacle of 21st-century lighting, and they are here to stay. Besides being better for the environment than their incandescent ancestors, the long-term benefits of a Tampa light company revamping your lighting with new generation LEDs will be the best switch for you.

Without a doubt, helping the environment while saving your own hard-earned money is a dream come true for most. If you are still in a dilemma over switching to LEDs completely, here are some things you need to know before deciding to make the change.

At first glance, LEDs look costlier than their incandescent counterparts and might look like an unfavorable trade. But, think of switching to LEDs as an investment rather than a purchase. An LED bulb will outlast an incandescent bulb by a long shot. With an incandescent bulb, you will definitely experience a sudden burnout within 2 years of usage, but with an LED, there is a gradual decline after years of use, giving you plenty of time to get a replacement.

Since LEDs do not rely on filaments or glass enclosures, they can handle bumps and drops better without breaking a sweat.

The need for an LED rose up when the incandescent bulb could not be optimized any further than what it already was. Converting just 10% of the energy into light and wasting the remaining 90% in the form of heat was a very inefficient way to create light.

LEDs convert a stark 95% of the energy consumed into light compared to their predecessor. This helps you reduce your overall carbon footprint while resolving landfill issues due to the longer lifespan of an LED. Unlike incandescent lighting, an LED does not require hazardous materials like mercury or toxic gases to make them function, thereby reducing toxicity hazards.

LEDs are increasing in popularity because of their ability to throw high concentrations of light in specific desired directions. Incandescent bulbs reflect light on all angles and directions, unlike an LED which is directional and grants you the option to focus the light where needed.

An LED fixture can be designed around any requirement. Due to the portability and the low heat generation of LEDs, they can be housed in a variety of fixtures, wattages, and sizes. An LED will feel right at home in any fixture, from indoors and exteriors of a home to cranes and warehouses.

Depending on the LED driver and the controlling factors, the dimming performance of an LED can vary vastly. However, specific LEDs are preferred for dimming purposes since they handle much lower loads. An external LED dimmer may be required for the LEDs that don’t have in-built dimmer compatible circuits. The setup is about the same cost as regular dimmer switches.

Studies show that poor lighting can often lead to reduced employee motivation. Insufficient or improper lighting can create glares and reflections, leading to difficulty concentrating on the task at hand.

In places like warehouses, poor lighting can lead to work-related accidents. LEDs remove the unreliability and the poor-quality lighting of older generation lighting systems.

LEDs are the benchmark in lighting solutions and will remain so for a long time. It may seem daunting to switch to a new lighting solution, but it is a hassle-free experience. Most LED bulbs can be retro-fitted into your old bulb sockets. These 7 points are just an introduction to the innumerable benefits of making the switch to LEDs. For an advanced LED setup, you can always connect with a professional lighting company Tampa Fl.